When we met four years ago Chris was an enthusiastic cook but did not own anything other than a toasting machine, so we often had grilled cheese and grilled cheese 😀 But one in a while he was able to borrow a charcoal grill, and one the first real date meal he made was bacon explosion. We have made it dozens of times since and now believe to have reached the definite perfect recipe, which we of cause are willing to share with all our wonderful readers 🙂

Due to that history, this dish means something to us and we like to make it for ‘date nights’. We have served it in many different ways and last night we decided to serve it in a French baguette with tomatoes and mozzarella and was really great.

Have you ever made bacon explosion?? If yes, what are you using for filling and how do you serve it??

Melt the butter on a medium-hot pan and sauté onions, mushrooms, garlic and thyme for 4-5 minutes or until the onion pieces begin to soften a bit. Set aside while preparing the meat and bacon.

Weave the bacon slices together, as shown on the picture below. Do it on a piece of baking paper, so it is easy to wrap around the meat when finished. Set aside.

Combine grounded beef and pork in a mixing bowl together with 1/3 cup BBQ sauce and salt and pepper. Place the meat on a piece of baking paper when mixed well. roll it out until it is approximately 2 inches smaller than the bacon wrap.

Spread the shredded cheddar on to the meat followed by the rinsed spinach (remember to rinse the spinach thoroughly, as it is one of those vegetables that might contain a lot of dirt), the onion and mushroom mix and last (but not least) the jalapeños slices. Be aware to leave an edge in the meat, so that the vegetables and cheese and be fully covered when making the meat roll.

Roll the meat up, with the filling inside, using the baking paper to help you. Close both ends of the ‘sausage’ before transferring it to the bacon wrap.

Place on indirect heat on the grill and grill it at 360F for approximately 90 minutes. Toss a piece of wet applewood into the charcoal to give it some smoke.

Combine 2 tbsp. BBQ sauce with brown sugar and soy sauce and stir to dissolve the sugar. Spread on the BBQ/sugar mixture approximately 60 minutes into the grilling. This will make the bacon surface shine at taste both sweet and salty. 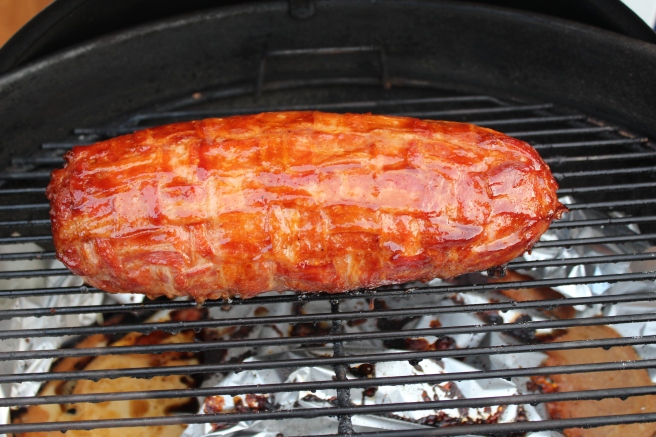 Remove the bacon explosion from the grill after 90 minutes and let it rest while warming the bread.

Slice the bread and place it on the grill with the inside down for 2-3 minutes. Then spread on some mayo and place the lettuce leaves on the bottom half of the bread.

Cut the meat into 1-inch slices and place 4 slices on each sandwich bottom. 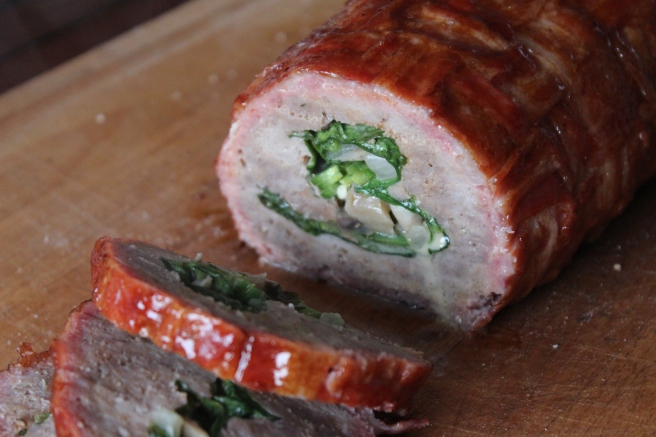 Spread out a few stripes of BBQ sauce on the meat slices before placing the tomato and mozzarella on top and finally the top half of the baguette.

Serve with a cold beer 😀 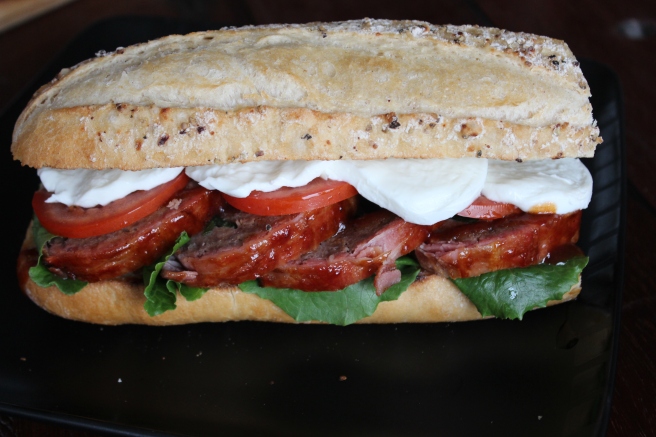