Many of you readers might have heard about nordic rye bread but never tasted it, as it is almost impossible to obtain in other than the nordic/scandinavian countries. The Danish rye bread differs from other rye bread types as it is less sweet and less dark.
In Denmark we eat it for lunch as an open sandwich with cold cuts, pieces of meat or fish, cheese or spreads and compared to bread made with wheat flour it is much more dense.

Foreigners (not Danes) often finds it too dense and heavy, but served the right way as a good quality open sandwich we believe that almost every one will love it 🙂

The sour dough used in this recipe is more than 100 years old and keeps living and raising our rye bread to perfection, but when making the bread for the first time you will either have to buy the sour dough or make it from scratch (1/2 cup wheat flour, 1/2 cup rye flour and 1 cup water; combine and let rest on the kitchen table for 4-5 days; stir once a day).

Combine rye flour with beer and 1 4/5 cup water in a mixing bowl and stir to combine. Add sour dough and stir until evenly combined. Cover the bowl with plastic wrap and set aside on the kitchen table for 15 – 20 hours. 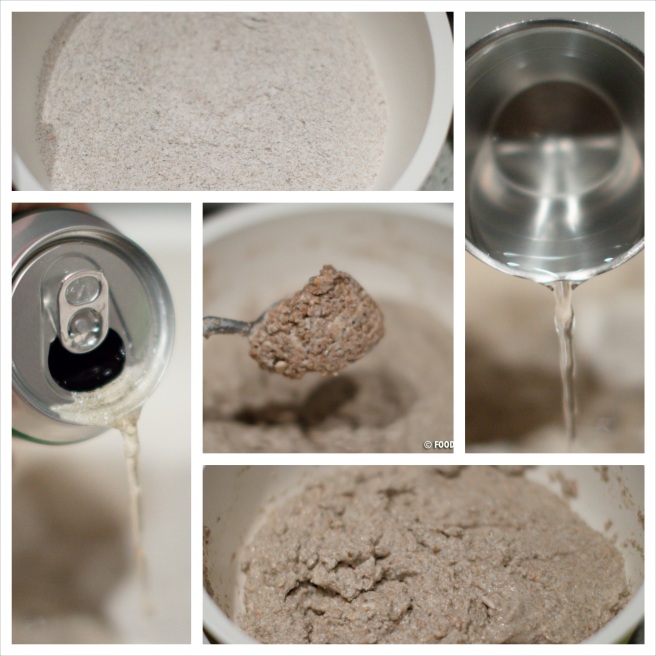 Place cracked rye kernels in a separate mixing bowl and add the boiling water. Stir until the kernels have absorbed all the water and let rest for 5-10 minutes.

Pour chia seeds, sunflower seeds, salt and the remaining water into the raised batter and fold gently with a rubber spatula to combine. Then add the soaked kernels one cup at a time and gently fold again.

Take 3 tbsp. of the combined rye bread batter and put it in a airtight container and fridge until next time you are baking rye bread (preferably no longer than two week – we eat one bread a week, so it is no problem for us to use the sour dough 🙂 ).
Place the remaining rye bread batter in a greased loaf pan, cover with plastic wrap and let raise until it reaches the edge of the loaf pan.

Bake the raised rye bread at 400F for 90 minutes (remember to remove the plastic wrap before putting the bread in the oven).

Remove the baked rye bread from the loaf pan, cover it in a tea towel and let rest on a wire rack for at least 5 hours or until completely cooled. To soften the crust, you can store the bread in a plastic bag for up to 8 days at room temperature. 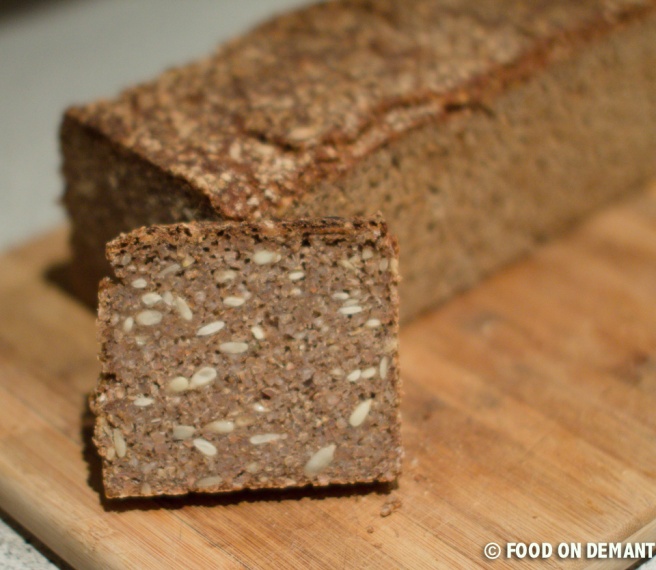 When having a vegetable garden, one always looks forward to digging up the first new potatoes and picking the first sun ripened tomatoes 😀 Every year we try to plan it, so that we can have the first potatoes in late May, but as the spring weather in Scandinavian are quite varying with both rain, freezing weather and snow it can be difficult to plan anything 😦 So this year we had to wait until mid-June before we could dig up small, yellow gold nuggets 😀 But, but, but it was definitely worth the waiting!

When it comes to the tomatoes, it is still to early to pick our own, so these are bought on the local farmers market. In Odense where we live, we have farmers market twice a week, wednesday and saturday between 7.00 am to 1.00 pm. There we can buy vegetables, herbs, fruit, cheese, seafood and flowers, all fresh and delicious 😀

Last note before giving you the ‘recipe’ for this easy lunch, is that the rye bread is home made from sourdough, rye flour, kernels, dark beer, salt and sunflower seeds. It takes approximately 24 hour to make a rye bread from beginning to end, but it so much better than what you can buy in the super market. Sooner or later we will give you our rye bread recipe too 🙂

Divide the two rye bread slices in half, and place on two plates. Slice the cooked and cooled potatoes and the tomatoes into 1/2-inch slices and place on the bread like shown on the pictures below.

Add a thin stripe of mayo on top of both potatoes and tomatoes.

Top of the tomatoes with basil and season with salt and pepper.

Spread out the chopped radishes and chives on top of the potatoes and season with salt and pepper as well.

To make it traditional Danish you can serve it with a cold snaps shot, but be careful – people tend to get crazy ideas when drinking snaps 😉